I spent most of my free time during the weekend (when I wasn’t relaxing by watching TV, out with friends, or walking around the city) playing Flappy Bird. Yes, the game that used to be (until it was removed by its seemingly money-hating creator) at the top of the iTunes charts captured me. I was hooked. I figured I had to do something with the new addiction, otherwise I’d just be wasting time… so, I decided to start recording my progress.

Between Saturday morning and Sunday before I went to sleep, I played Flappy Bird 77 times – with definitely varying success. I did a couple trials and found that it took about 10 seconds (on average) to clear five of the obstacles. Using that, I figured that my 77 tries at Flappy Bird dominance, averaging a score of 17.85 meant that I spent roughly 45 minutes tapping my phone over the weekend – I actually was fearing it would be much, much more. 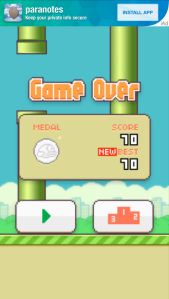 Being a curious, data-obsessed person, I started looking at the variables that surely (because there’s no way I was that random) had to have been causing the wide swing in scores. You can have a yellow bird, red bird, or blue bird. You can also fly at night or in the daytime. That gives us 6 different combinations. The thing is, there was no correlation between any of those any my scores – so yes, I am really that random with my performance. 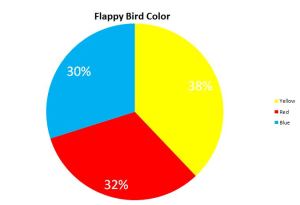 Yellow birds were the most-prevalent, but not by much.

Flappy Birds definitely like to come out during the day.

What Did I Learn?

Nothing, honestly, except that I am not very good at this game. It was, however, interesting to see the advertisements change as I went along. When I first started playing Flappy Bird last week, the ads were something that you’d see plastered across most games – Poker, Dating, etc. However, as time wore on and the game got more popular, I started to get ads for Google Maps, other more “sophisticated” apps, and even one that kept popping up for Givenchy. You know an app’s gotten on someone’s radar when luxury brands are advertising their app on it, potentially diluting their brand a bit. 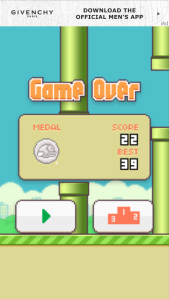